BLOG
Blogs contained here emanate from questions or responses to themes that arose in psychological and spiritual settings – sessions, groups, training workshops, etc. Please note that blog entries 64-166 are drawn from Richard Harvey’s articles page. This retrospective series of blogs spanned over 25 years; please remember when reading them that some of Richard’s thought and practice have evolved since. We hope you enjoy this blog and that you will carry on submitting your psycho-spiritual questions for Richard’s response, either through the form on our Contact Us page or in the ongoing video blog series. Thank you.
« Setbacks as Blessing... | Main | Only God and “I” » 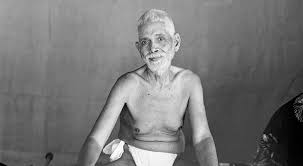 Something of the timeless, transcendent, absolute quality of the guru is, in particular, presented in first meetings. Meeting the guru is like no other kind of meeting. The meeting beyond time exceeds the usual parameters of expectation.

Ramesh Balsekar's first meeting with his guru Sri Nisargadatta Maharaj was like this. Climbing up to the loft of Nisargadatta's residence in the backstreets of Bombay, Balsekar found Nisargadatta seated in one corner of the room, lighting joss sticks. He bowed down and placed an offering of fruit before him. Balsekar reports, "... he looked at me with his piercing gaze, then smiled at me warmly and said, "Ah, you have come, have you? Do sit down." For a moment I could not help wondering if he had mistaken me for someone else, because his words seemed to imply that he was expecting me."

The guru virtually never reacts or responds in the way you anticipate. The merest glimpse or short exchange challenges your personality's assumptions. Here is the account of Papaji's first meeting with Ramana Maharshi:

When I contacted the Maharshi in the hall, I asked him a question: "Can you give me the experience of enlightenment?" He kept quiet.      Again I asked him, and again he kept quiet. So, I was not very much impressed with him not speaking to me.

It was a very direct teaching, not indirectly, through the senses or any sign. He didn't speak a word. So, by this I mean, a direct               teaching from Heart to Heart, without any word. This is the direct teaching... it worked very well, because I had never seen any teacher who could speak directly from Heart to Heart. Everybody speaks through words, or reads some scripture, but he didn't do either of these... I felt some vibration in my heart and then my doubts disappeared. So, this was the first time I met this kind of teacher.

Archetypal appearances, the effects of being somehow unprepared, the significance of patterns and numbers, extraordinary physical manifestations, and exceptional physical responses or kriyas—all of these are here in Irina Tweedie's meeting with her guru, Bhai Sahib:

... before I even had time to recollect my thoughts, three bearded Indians emerged from the door opposite the gate and were advancing towards me... All three were elderly; all three were dressed in white. I stood up, jumped down from the tonga and, joining my palms in the Indian way of greeting, looked at each of them in turn, not being sure which one was the Guru. The oldest and the tallest of the three, who looked exactly like a prophet in a nativity play—grey beard, blazing dark eyes—walked ahead of the other two, and, as if in answer to my thoughts, pointed to the one walking closely behind him. This was the Guru.

Next moment he stood in front of me, quietly looking at me with a smile. He was tall, had a kindly face and strange eyes—dark pools of stillness they were, with a sort of liquid light in them, like golden sparks.

I just had time to notice that he was the only one to wear wide trousers and a very long kurta... of immaculate whiteness; the other two were clad in rather worn kurtas and longhi... My mind had hardly time to register it—then it was as if it turned a somersault, my heart stood still for a split second. I caught my breath... wild cartwheels were turning inside my brain and then my mind went completely blank.

And then I was—it was as if something in me stood to attention and saluted... I was in the presence of a Great Man...

The spiritual master, the guru, always has an unusual, eccentric or in some way exceptional relation to the relative world, the world about him. It is as if the saying, Be in the world but not of it, is demonstrated by his mere presence. Recently returned from India, Ceylon, and Egypt, Ouspensky describes his initial meeting with Gurdjieff like this:

We arrived at a small cafe in a noisy though not central street. I saw a man of an oriental type, no longer young, with a black moustache and piercing eyes, who astonished me first of all because he seemed to be disguised and completely out of keeping with the place and its atmosphere. I was still full of impressions of the East. And this man with the face of an Indian raja or an Arab sheik whom I at once seemed to see in a white burnoose or a gilded turban, seated here in this little cafe... in a black overcoat with a velvet collar and a black bowler hat, produced the strange, unexpected, and almost alarming impression of a man poorly disguised, the sight of whom embarrasses you because you see he is not what he pretends to be           and yet you have to speak and behave as though you did not see it.

Or this somewhat reluctant meeting of JB with J Krishnamurti following a public lecture:

I was the last one in the queue and suddenly realized that I was the only one left... so, No way out! I walked towards him... shook his hand and said thank you for this time and goodbye. "Yeees sir!" he said. That's all, on the visually apparent level... in those few seconds also the following happened. He took my hand and with his other hand my elbow... it felt as if my whole being and its contents were being shaken "in place"... a current of quite a high speed passed on through the rest of my body from            hand, head, toes...it was like a good and instant shower... he looked into my eyes... I've never seen such large, deep, dark eyes!... as a space with no end (which brought a kind of shiver/fear in me, similar to that of heights) and this to-the- eye, invisible and yet perceivable floods of love pouring out of his eyes... a bit like fluid honey would be pouring out of a jar... I was standing there hardly prepared for all of that... and this little man (he did not reach higher than my chest area) as definitely felt by me that he was about four times taller than me.. Since it all happened so       quickly, only when I stepped out of the room, did I realize what had happened.

Rather like the realization that Carlos Castaneda had latterly that his teacher Don Juan was teaching him behind a veil of silence in a way he could not detect at the time, often what transpires between the guru and the would-be aspirant is only recognized after it has happened. Beguiled by our self-identity in the realms of space and time we are hypnotized in a delusion in which the guru does not participate.

And finally, in his second meeting with his master Sri Ramakrishna Paramahansa, Naren or Narendra, later known as Swami Vivekananda, through a mere touch from the master encounters death and the void:

During his second visit to the Master, Narendra had an even stranger experience. After a minute or two Sri Ramakrishna drew near him in an ecstatic mood, muttered some words, fixed his eyes on him, and placed his right foot on Naren's body. At this touch Naren saw, with eyes open, the walls, the room, the temple garden—nay, the whole world—vanishing, and even himself disappearing into a void. He felt sure that he was facing death. He cried in consternation: "What are you     doing to me? I have my parents, brothers, and sisters at home."

The Master laughed and stroked Naren's chest, restoring him to his normal mood. He said, "All right, everything will happen in due time."

Narendra, completely puzzled, felt that Ramakrishna had cast a hypnotic spell upon him. But how could that have been? Did he not pride himself in the possession of an iron will? He felt disgusted that   he should have been unable to resist the influence of a madman. Nonetheless he felt a great inner attraction for Sri Ramakrishna.

Naren/Vivekananda was a highly rational young man. For some time he felt Ramakrishna was completely insane. But destiny ran its course and he became Ramakrishna's messenger to the world. Their very first meeting is reminiscent of Rameskh Balsekar's first visit to Nisargadatta's loft-room in Bombay. Following some devotional singing, Swami Nikhilananda writes, "Sri Ramakrishna suddenly grasped Narendra's hand and took him into the northern porch. To Narendra's utter amazement, the Master said with tears streaming down his cheeks: 'Ah! you have come so late. How unkind of you to keep me waiting so long!"

Wonderful, transcendent meetings, meetings with eternity itself, meetings with the Divine, meetings that seem predestined, meetings that carry the weight of the eternal but are filled with light and consciousness, meetings that defy normal logic and compel the disciple into human-divine transformation by altering the life course, by bringing with them a fresh quality of awareness and attention.